Solo Project: Designed the interaction, Sketched, Created sketch models to visualize the form, Created 3D models for the fabrication of the physical prototype through 3D printing, Coded the software on Adafruit Circuit Playground.

Despite arguably not contributing much to the actual sound of their music, expressive movements made by the musicians are key parts of most music performances.

"What if they 'have to' move to even make music?", I wondered. Inspired from that thought, I wanted to create "Uwi", an experimental instrument where performers actually have to move in order to play a piece. 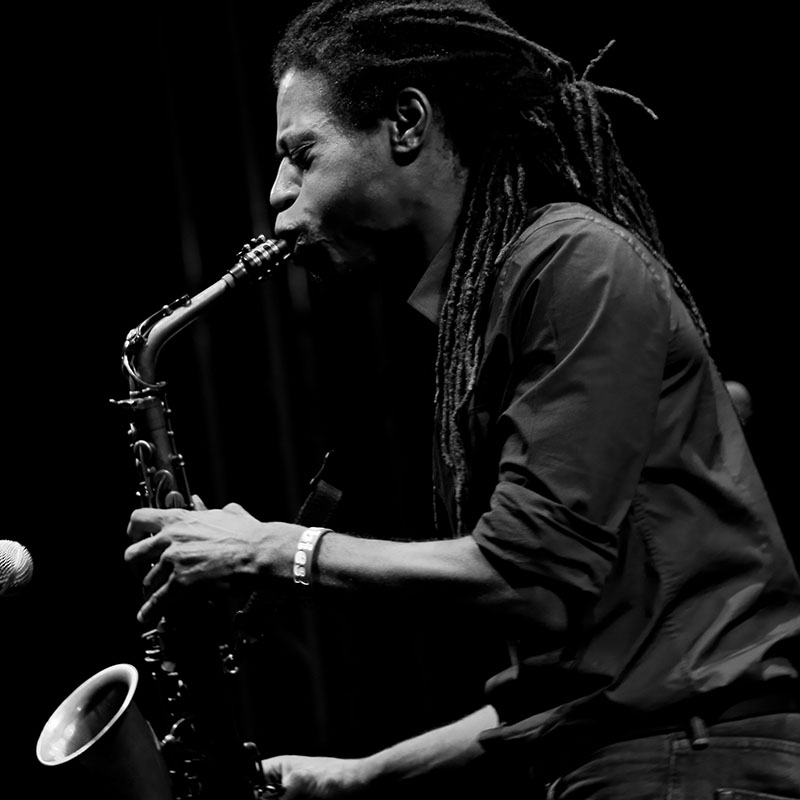 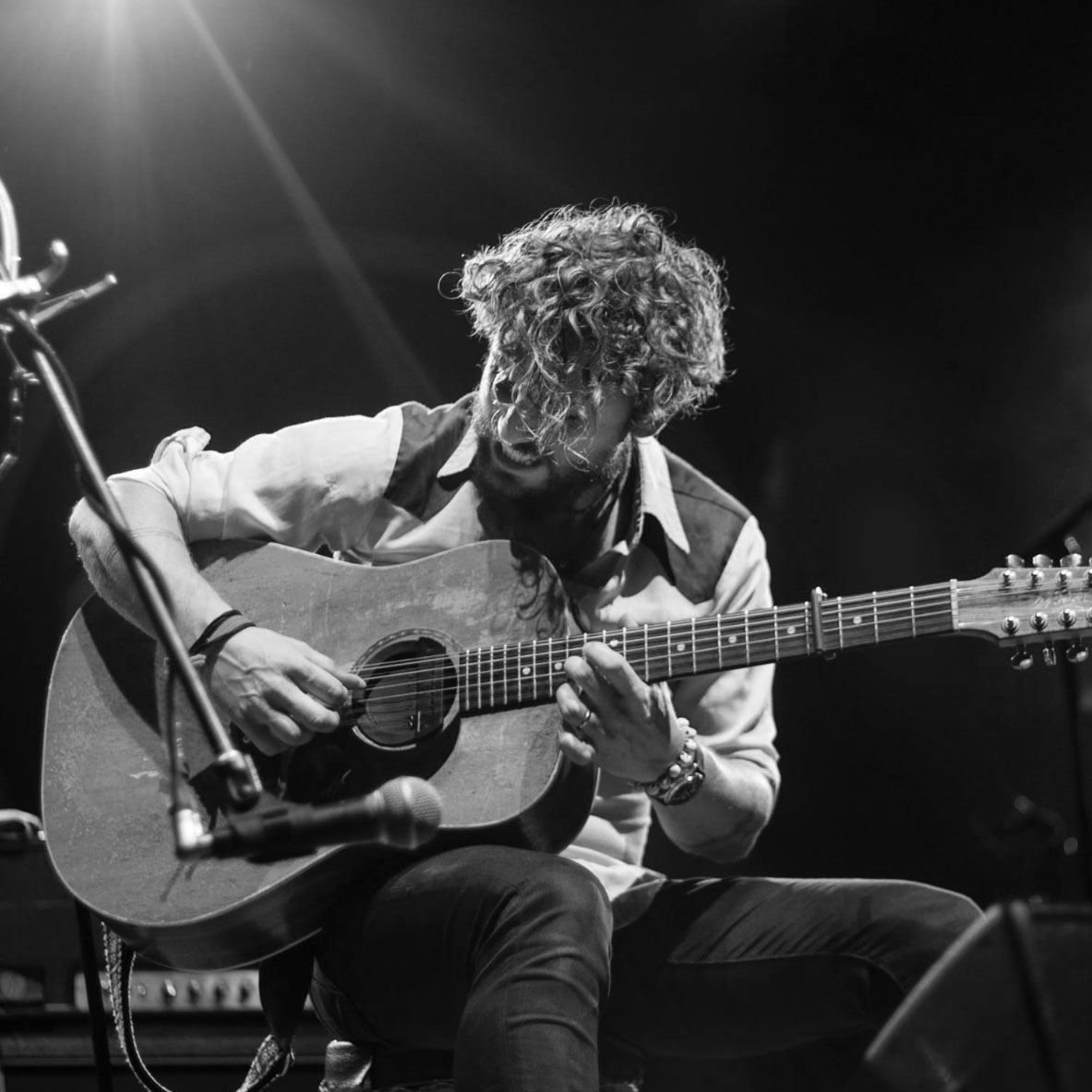 How engaging a musical performance is depends to an extent on the type of musical instruments the artist is using. More movements are often associated with how interesting-to-watch the performance is. Movements are also often used by musicians to express their emotion in the music

In this project, I aimed to design Uwi, an experimental wind instrument that requires the performer to move to control the sound, and see what the experience of playing and watching it is like.

Jump to the Process Section »

Exploring the use of body movements in musical performances. 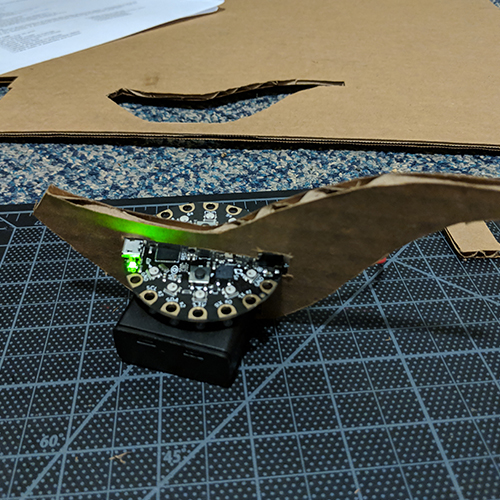 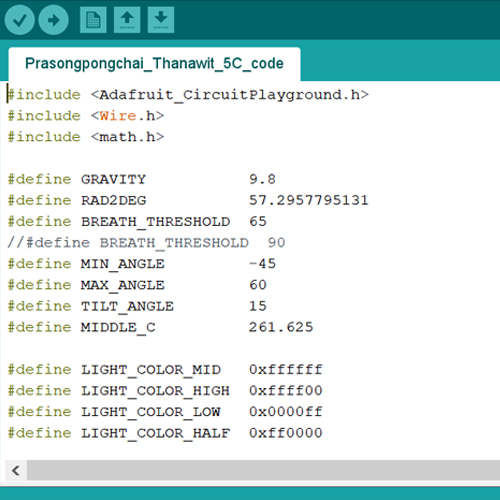 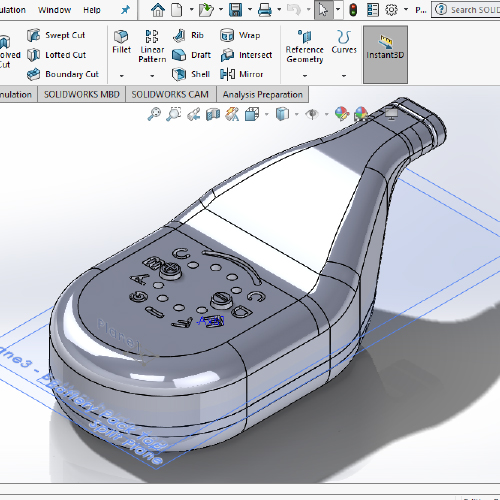 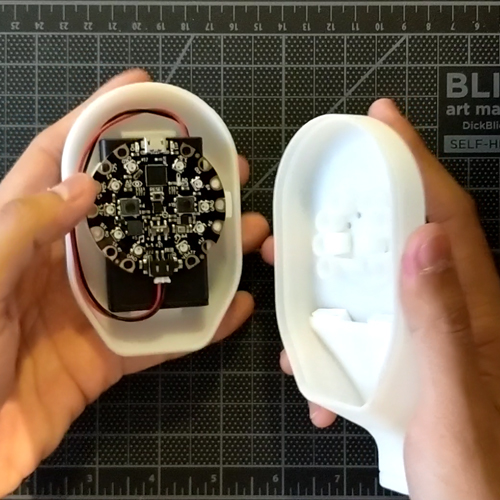 Adafruit Circuit Playground was the development board used in this project. It is an Arduino board packed with a variety of built-in sensors and output components.

Considering the design question of incorporating movement into music-making, I decided to use these components available on the board: 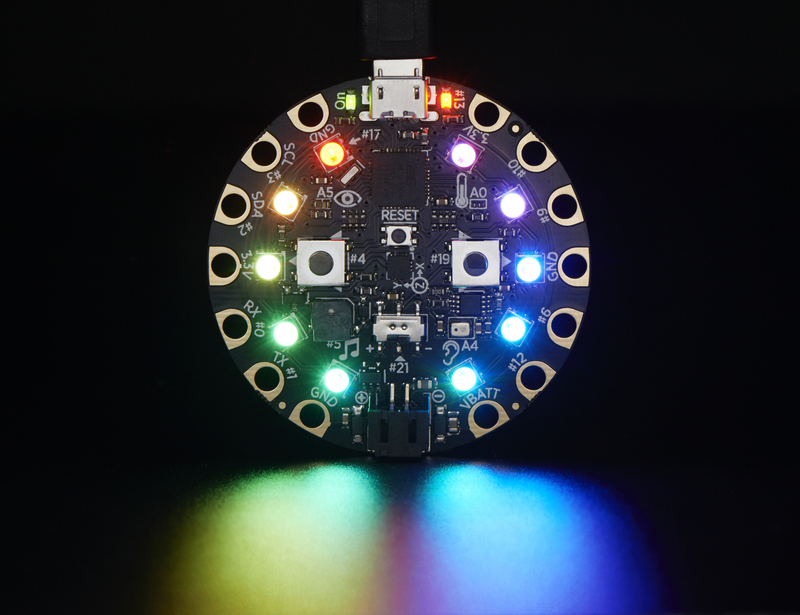 The form of the instrument was ideated through multiple methods including sketching and iterative modeling.

Sketches were drawn to brainstorm the forms of the instrument. The ideas were based on the shape of the Circuit Playground board and the pose that the musician will be in while performing with this instrument. These initial designs were inspired mostly from tobacco pipes and bird whistles.

Sketches for form ideation of Uwi.

Cardboard sketch models were then made in 1:1 scale to help visualize the actual scale of the design before jumping into 3D modeling. This also aided my decision for how the electronics should fit into the form.

Iterations of forms in cardboard models

Fitting electronics into a model

With the form designed, the core logic of the instrument was coded using Arduino C++ on the Arduino IDE. Circuit Playground's sensors and output were used to make the wind instrument which is controlled by the movements of the performer.

I went through a few iterations of the behavior of the interaction design while trying to make the instrument: 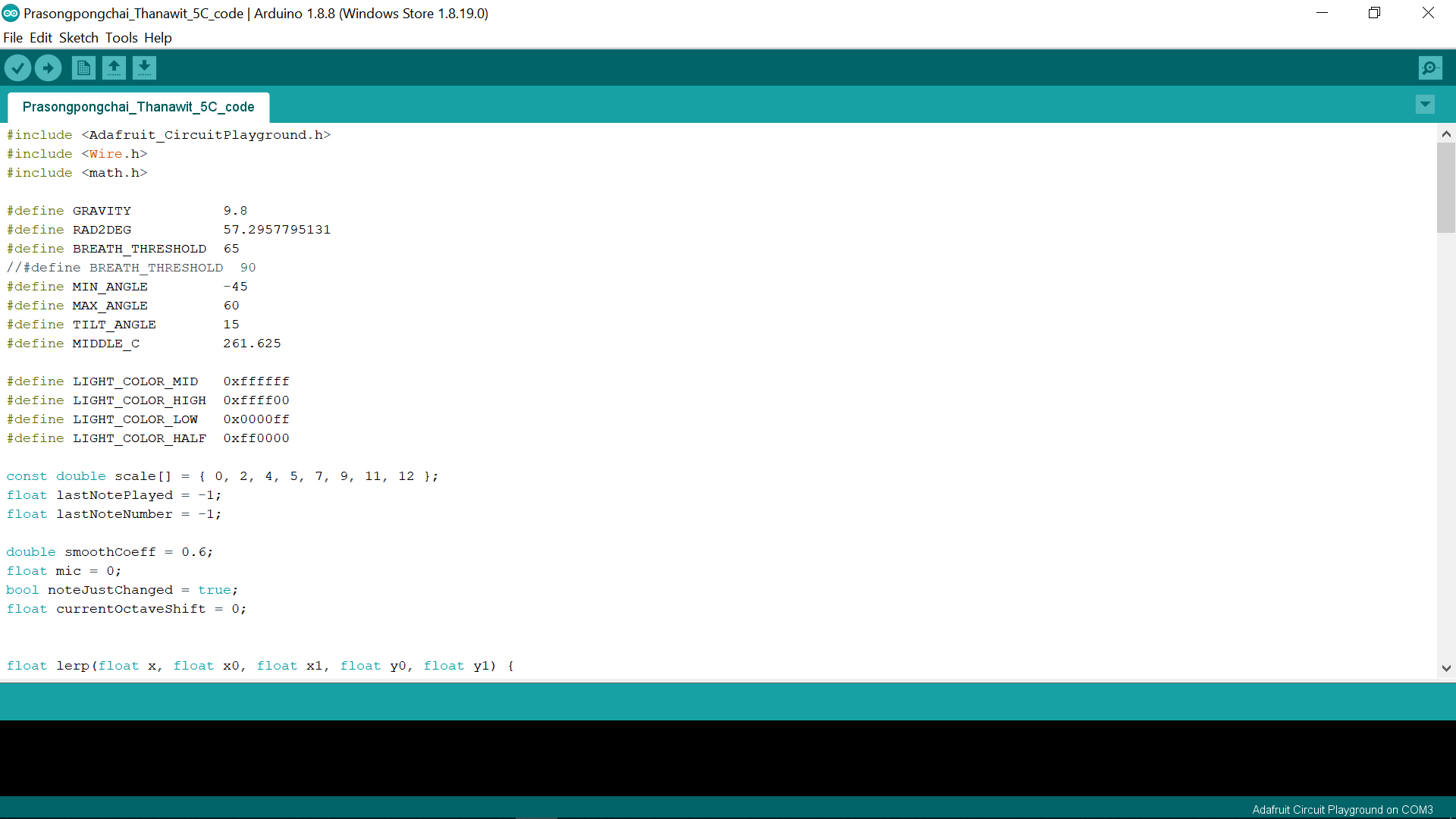 The tilt angle was mapped directly and continuously to the pitch, allowing performers to play at any frequencies, including those outside of standard western pitches. This is similar to how fretless instruments, such as violin, works in terms of pitches.

After some testing and trying to play songs on it, it became clear that the continuous mapping required too much precision and made it too hard to play. So, I changed the mapping to only map the angles to notes in a major scale. I also tried to add the other axis of tilting to allow sharp/flat pitches.

Since most songs requires a range larger than an octave, I added the ability to shift between octaves though the available buttons on the board, expanding the range of the instrument to 3 octaves.

The design was then modeled in SolidWorks. The parts were designed to be compatible with 3D printing processes.

The parts were then assembled virtually also in SolidWorks to see if, and how, they fit together and to check if there are enough indexing features. 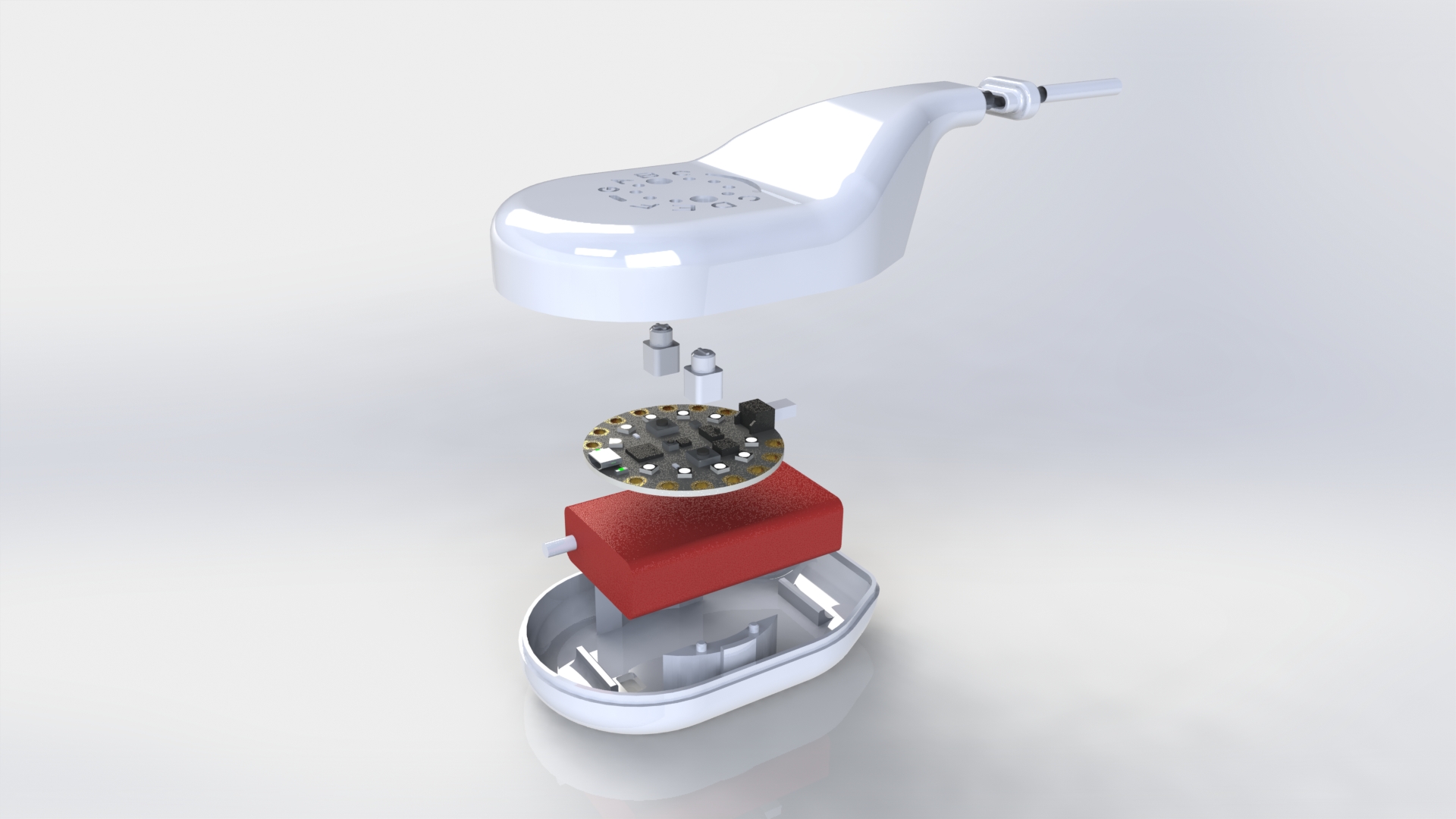 Exploded view of the design showing the steps of assembly 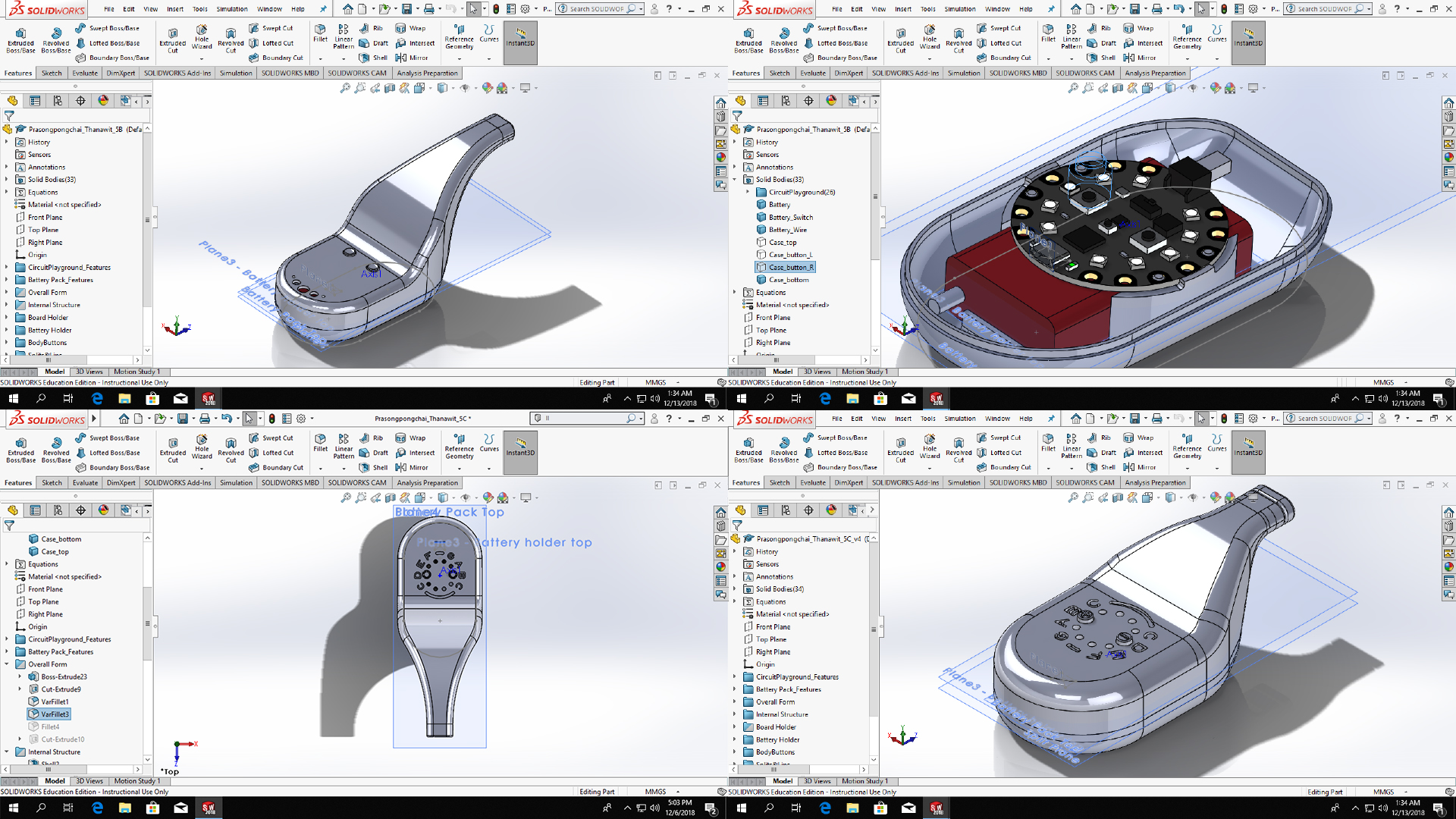 The initial design has a long windway with sound holes in the front of the instrument. I also tried to design the housing so that LEDs will shine through the top surface, lighting up the pitch letter to let the performer know what note will be played when blown. The model was 3D-printed in PLA as material. 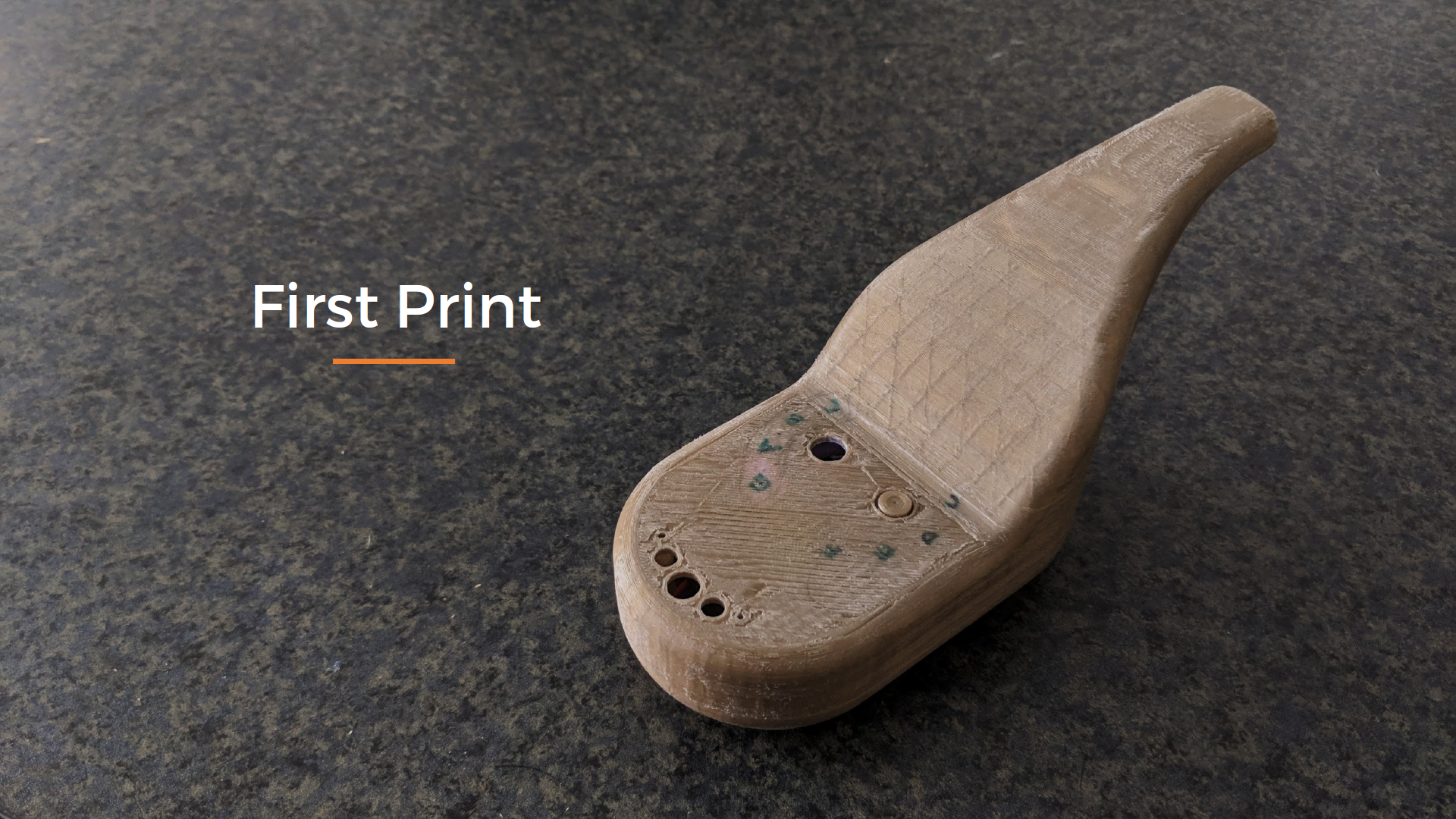 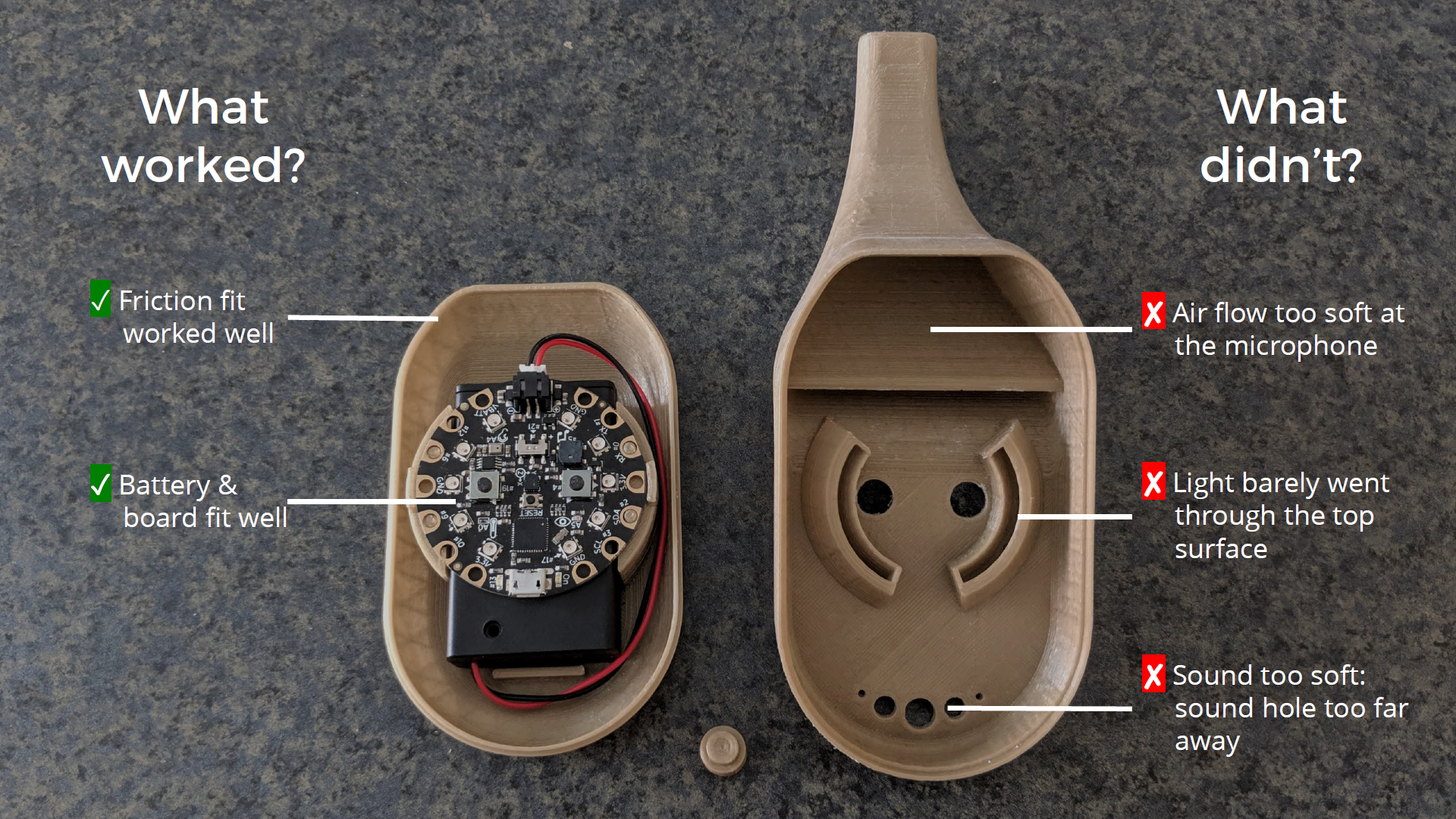 In this iteration, I tried to address issues found in the 1st iteration: light walls were redesigned with pitch letters now visible on the top surface, the windway was shortened, the sound holes were moved, and additional wind walls were added.

This iteration of the model was 3D-printed in ABS due to the unavailability of the PLA 3D-printer used in the 1st iteration. In preparation for the material change, tolerance values were adjusted to be wider to compensate with possible shrinkage of ABS prints. 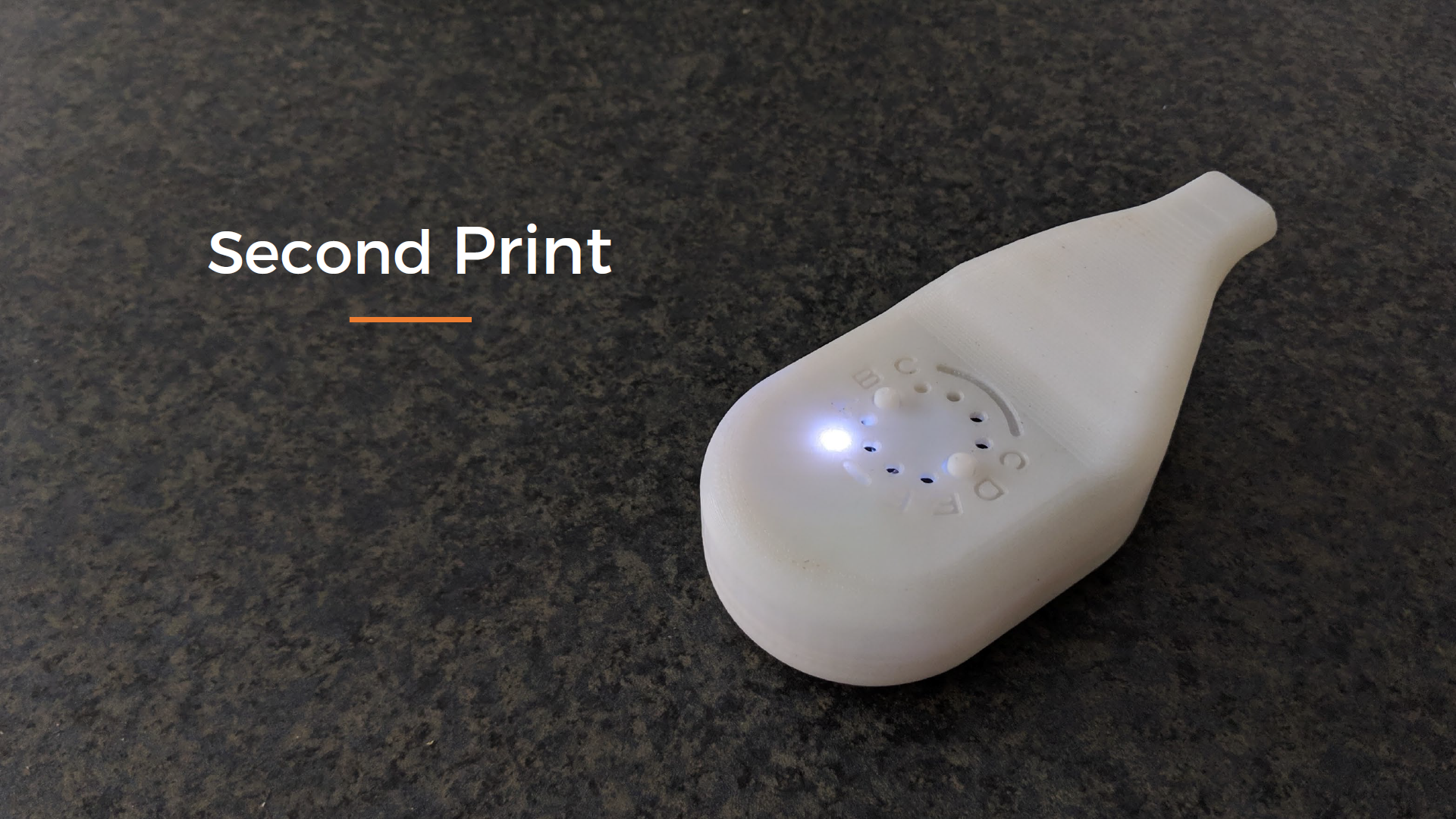 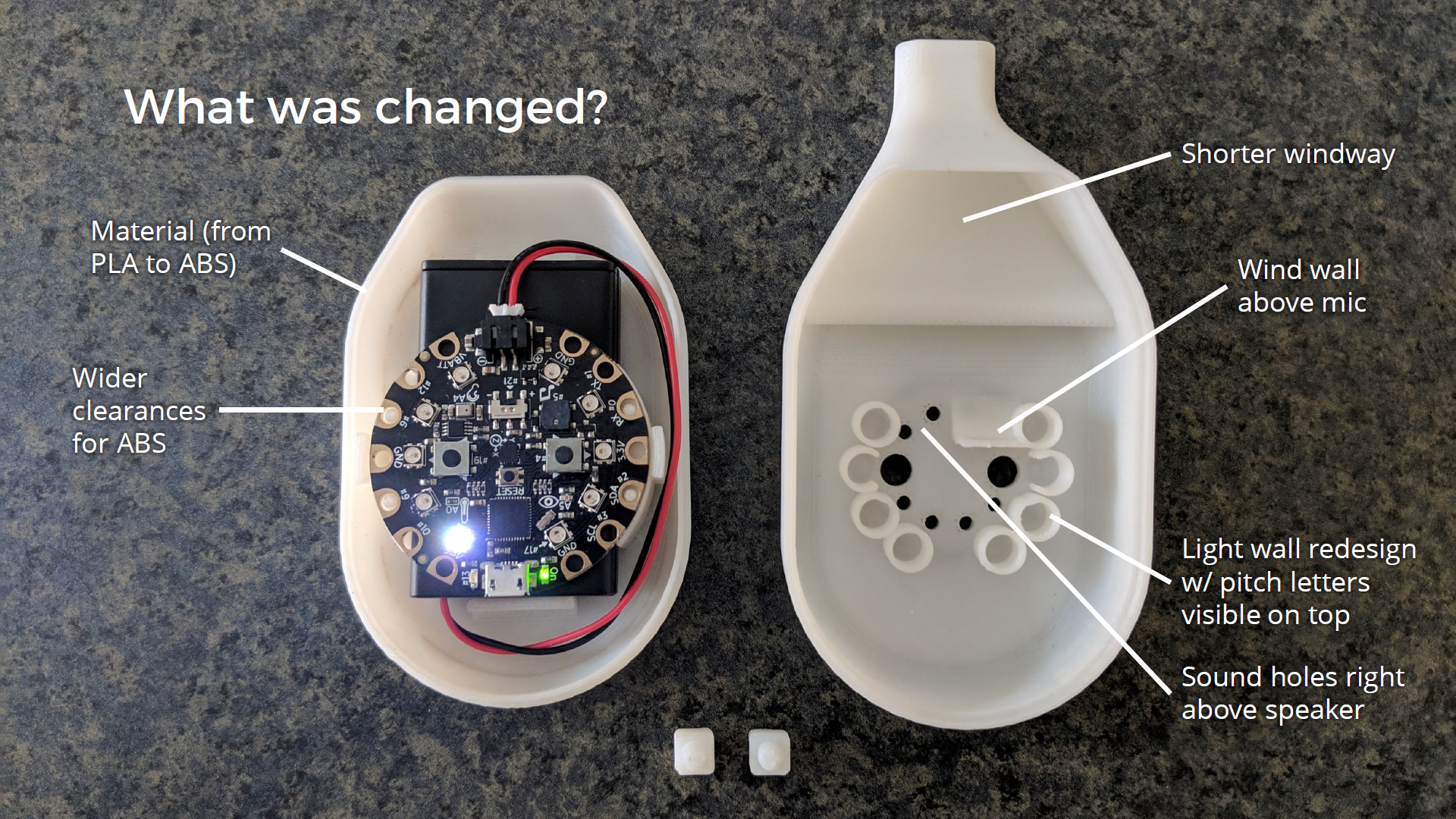 In this iteration, no major changes were made in terms of the overall form. The top piece was brought from the last iteration to save printing costs. 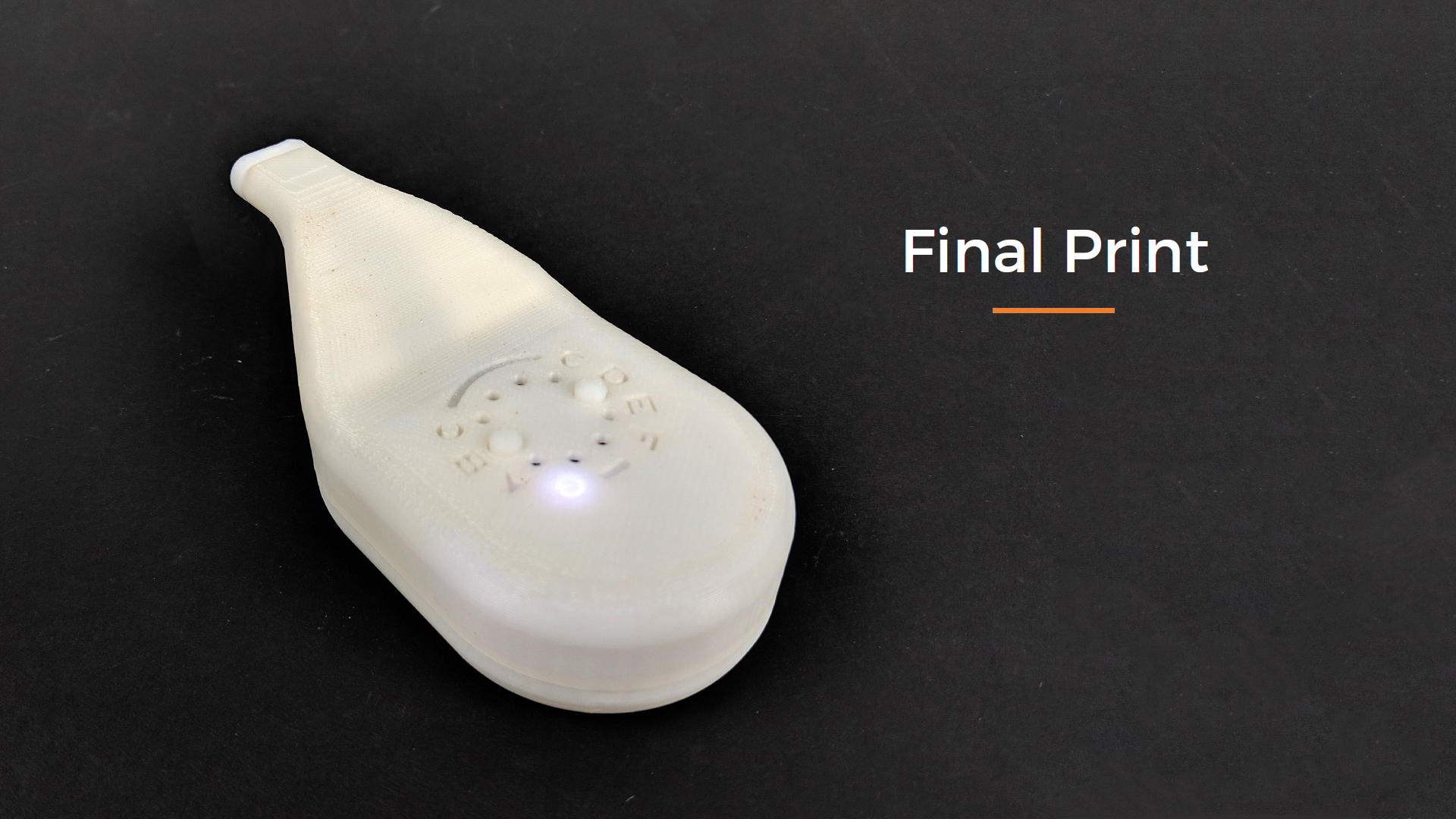 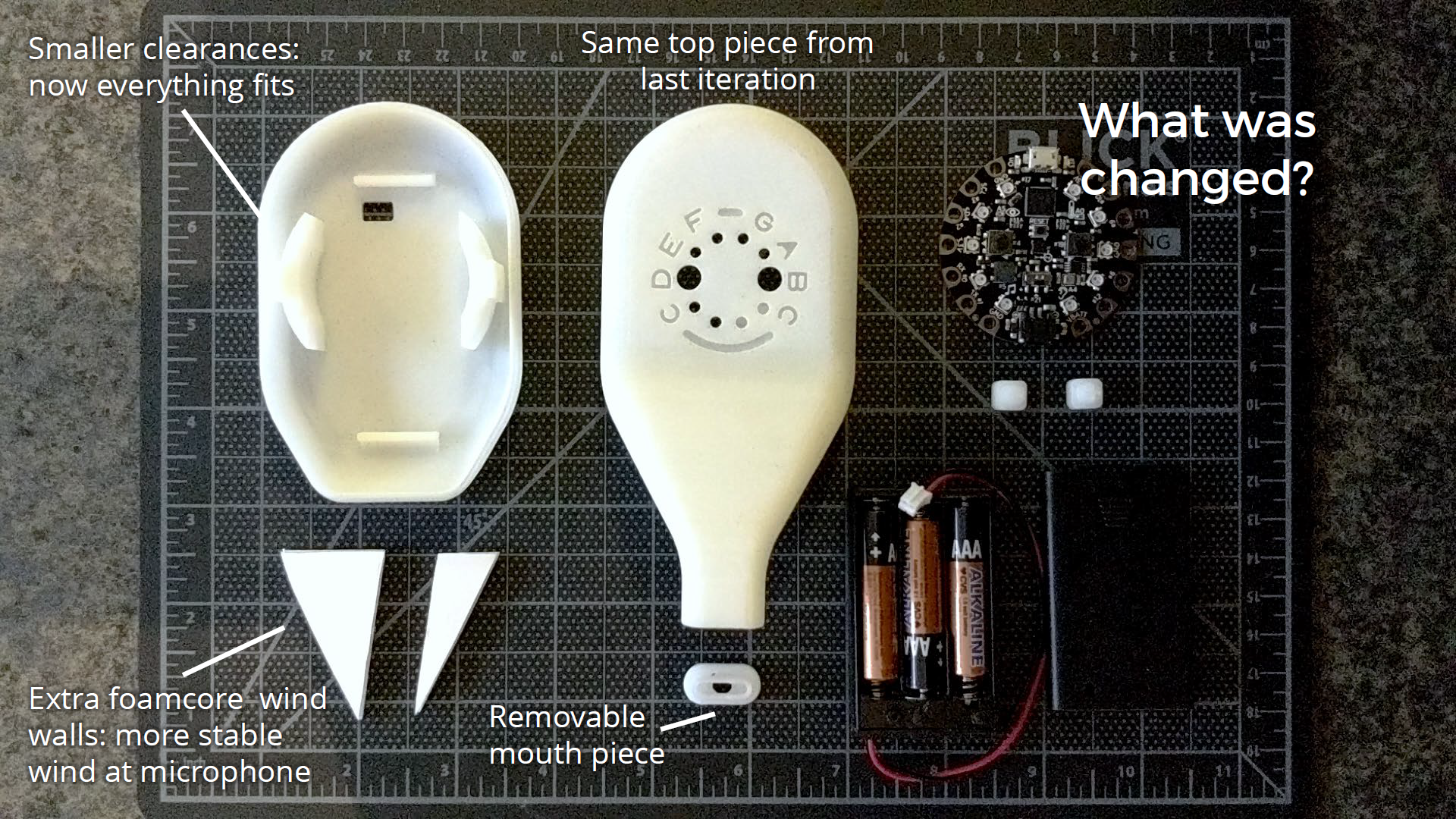 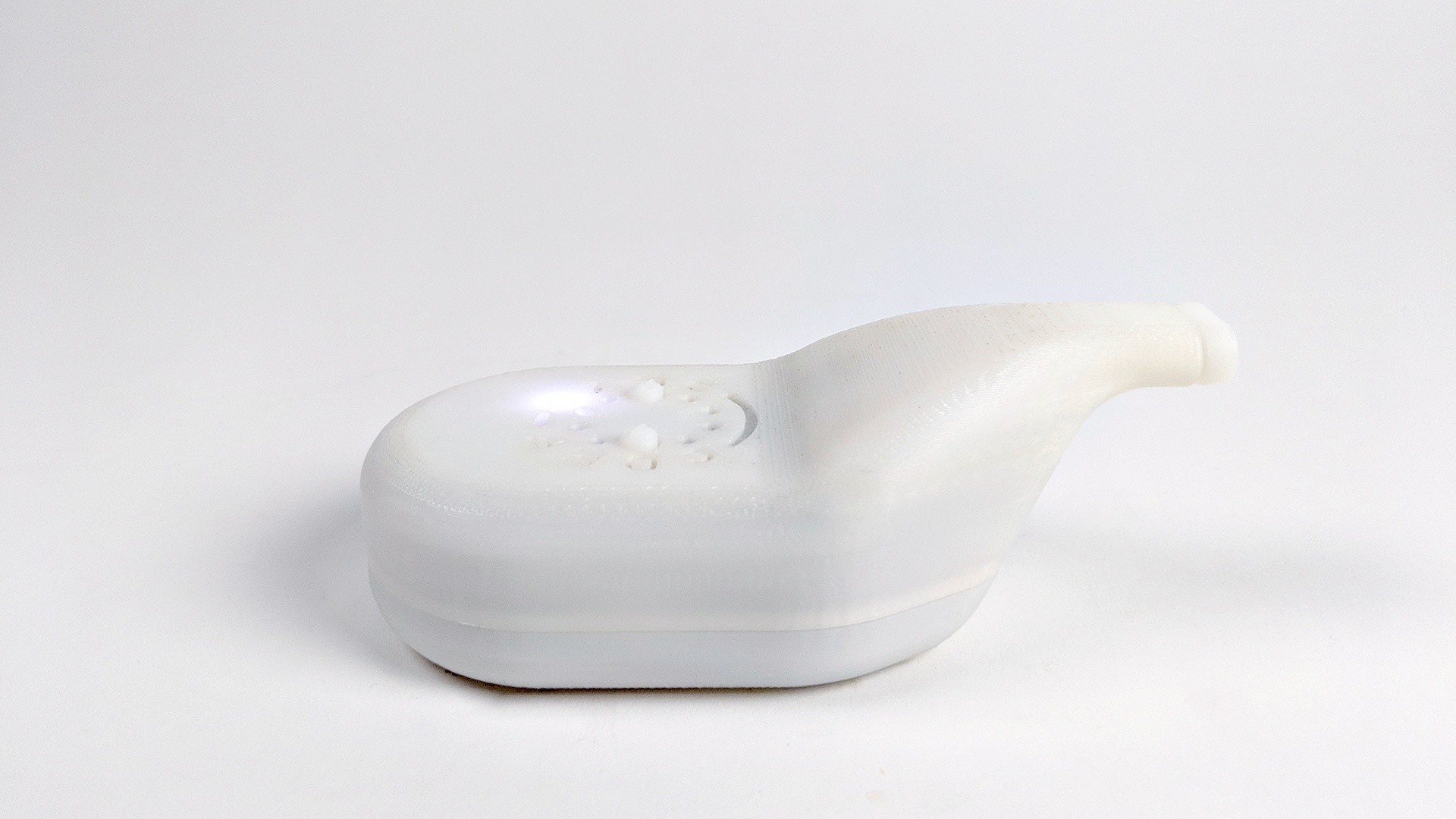 What I Found From Trying Uwi

The mapping between the tilting angle and the output pitch was natural and can be learned quickly. However, it takes a little practice to get used to the controls enough to play it accurately.

Easy to Start, Hard to Master

Uwi is easy to get started, but difficult to master. In other words, this instrument has a low "skill floor" and a high "skill ceiling". It appears that playing Uwi well requires a lot of precision and practice. This high challenge is what I think makes it fun to play.

Precision in movement required to play an Uwi might actually limit musical expressions. However, it might also make a Uwi performance interesting to watch

To make the instrument more expressive, other features such as volume control and vibrato should be added. Pitch change could also be more continuous than discrete to allow more nuances in the performance. 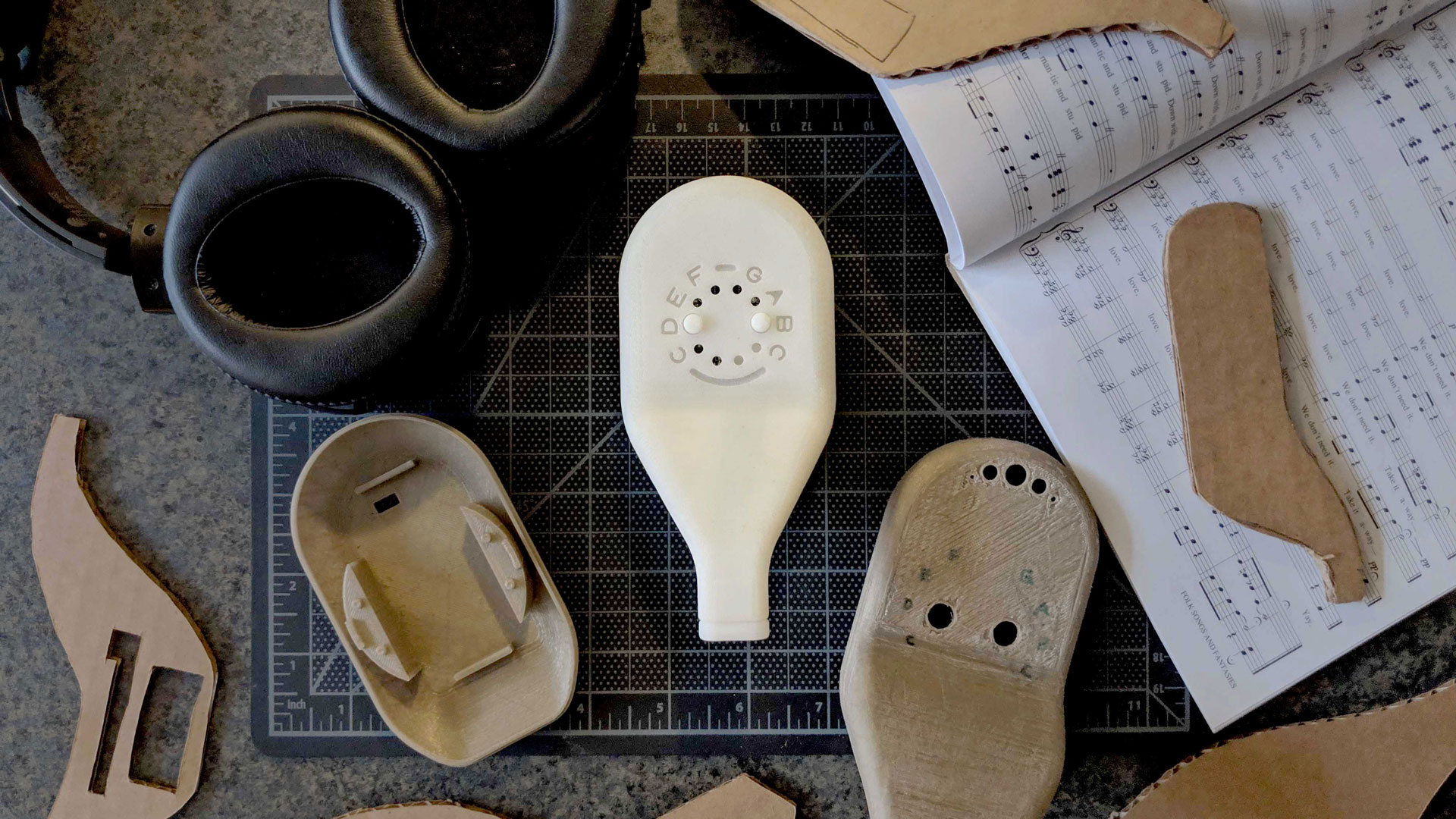